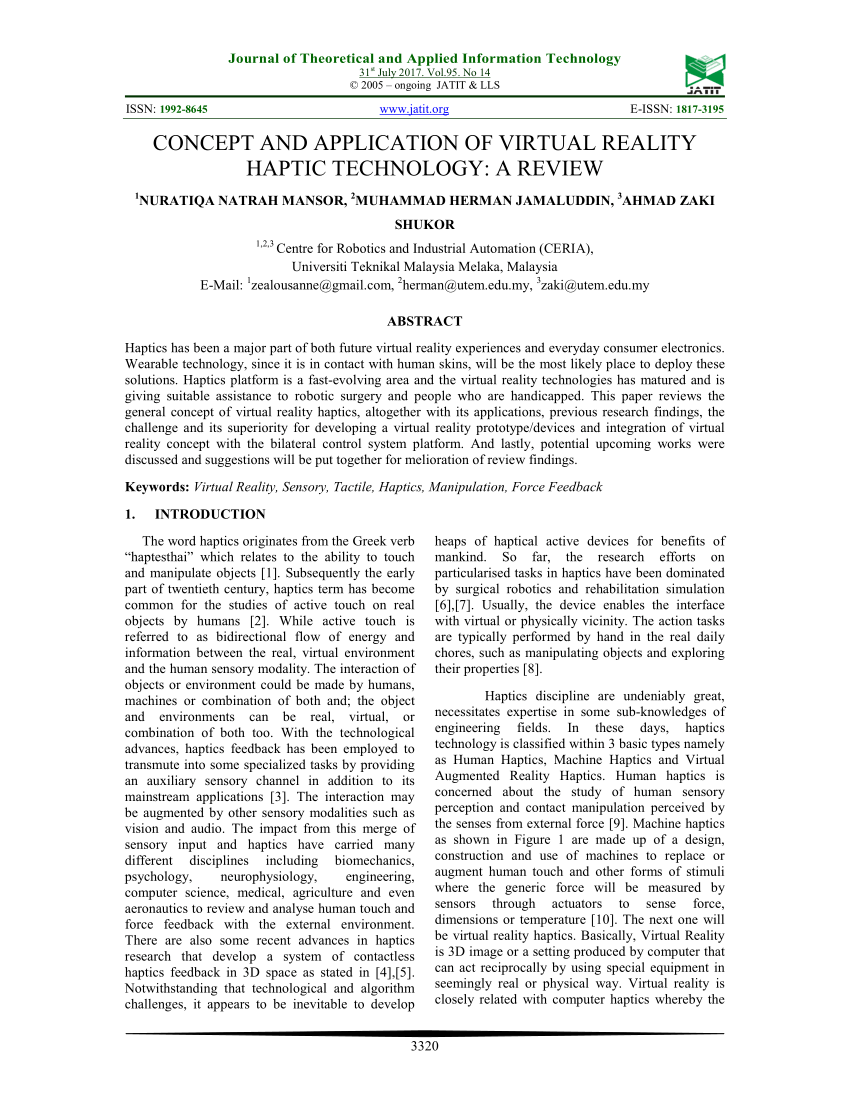 A description on some of its future applications and a few limitations of this technology is also provided. We use cookies to help provide and enhance our service and tailor content and ads. By continuing you agree to the use of cookies.


Not just better—obviously better. We excitedly ran around the office grabbing people to see if the difference affected everyone. It did. When you see, feel, and hear your hand tapping a table, your brain interprets the three sensory stimuli as a single impact event. This causes us to perceive the haptic sensation to occur later than it actually occurred.

Here's where it gets weird and cool. This perceptual shift is automatic and involuntary. No matter how hard anyone focused on fingertip haptics, the delayed audio still caused haptics to feel less responsive. Now we have all sorts of interesting questions to ask. How much latency is too much? How synchronous do stimuli need to be?

Is it more important to lower latency or increase synchrony? To start answering these questions, we ran a psychophysical experiment. Our first study was simple.

We wanted to assess how much latency is allowed between a visual and a haptic stimulus for users to consider them simultaneous. This test was performed in virtual reality, with tracked and fully articulated hands. Participants performed a task to tap a virtual cube. To simulate different latencies, we wrote code to inject extra latency. We also wrote some simple prediction code that allowed us to trigger haptic stimuli early — even before the finger hit the surface.

This was a way to simulate lower latencies than our system allowed.

Our initial study focused on a simple two-stimuli test.


Next, we ran a more complicated tri-modal simultaneity study with visuals, haptics, and sound. This is a significantly more difficult problem to model and visualize. We have data, but analysis is still ongoing. Here are preliminary results:.


The origin represents the situation where all three stimuli happen at the exact same time. All other positions on the graph represent asynchronies relative to the time of the visual stimulus. The x-axis indicates the latency of audio stimuli relative to visual stimuli. Positive x-values mean that the sound played after the visual flash. Negative x-values mean that the sound played before the flash.

The y-axis is similar, but for haptic stimuli. The color coding is what percent of participants rated the three stimuli as simultaneous. Participants were very sensitive to haptic or audio stimuli that occurred before visual stimuli. Second, the shape is more ellipsoid than spherical. Participants were more sensitive to haptic delay than to audio delay; asynchronies in that modality were more discernible. In contrast, audio delay tended to be more acceptable. Our sample size was small, and our initial experiment was very simple. We found that changing the type of interaction can have large effects on what asynchronies were deemed acceptable.

Results are likely to change substantially with a different task or different types of stimuli. This concludes my tale for today. I got to work on a fun problem. We discovered something unexpected. And we learned a little bit more about the way human perception works. Many thanks to all readers who made it to the end.